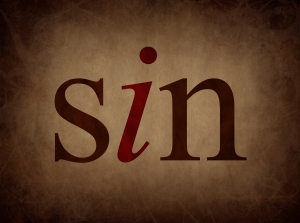 Sometimes I wonder about things that I have a feeling I’ll never know this side of heaven (but really REALLY hope to find out when I get there). Things like, why don’t we get the full story in “x” story in the Bible? Or what was Jesus’ tone of voice in “y” story? Or what’s up with the dinosaurs? (seriously, where’d they go? and how?)

One of my favorite things to think about (in a kind of twisted sense) is what sin must have felt like to Jesus as He walked on the earth. And particularly, what did it feel like for this Holy God to experience the weight of sin as it was laid on Him at the cross?

We know sin all too well so it’s hard to wrap our minds around what it was like for Jesus. Sin is like that annoying friend that we really don’t want to be friends with, but she just won’t go away…ever…until we die. (P.S. I don’t think I actually have a friend like that just so no one wonders if you are “that” friend…) We know sin because we were born into it. This is what is known as “original sin” (as opposed to “actual sin” which is exactly what it sounds like…the sins we actually commit). Sin entered the world in the Garden of Eden when the serpent deceived Eve and Adam, and they ate of the forbidden fruit. Going back to our topic on the covenant (and here), God had made a covenant with Adam and Eve, and they broke it when they disobeyed His command (“do not eat…”). This sin brings them under condemnation (Romans 1:32, 2:12-14, James 2:9-10) . It brings guilt, which also involves punishment (Romans 3:19, 5:18, Ephesians 2:3). Sounds pretty rosey, eh? (Btw, you can study more on your own in any Systematic Theology book. I have Louis Berkhof’s Systematic Theology book and use a lot of material from it for my posts.)

Our problem is that we inherit this sin from Adam (and along with that – condemnation, guilt, punishment…death). This is known as the representative theory. Sin inherently corrupts our nature. Another way to look at it is that Adam and Eve were originally made in God’s image, but when they sinned, it corrupted their nature (that’s not to say that we aren’t still made in God’s image, because we are, but now we don’t naturally seek after God since we are corrupt). Adam is known as our “natural head” and was our representative before God in the covenant. When he sinned as our representative, he imputed his sin to us (Romans 5:12, 1 Corinthians 15:21-22). TIME OUT.

Yes, I just said imputed. Here’s your big word lesson for the day. The dictionary defines this word as:

to attribute (righteousness, guilt, etc.) to a person or persons vicariously; ascribe as derived from another.

It’s just really ugly. And there’s no way that we can get ourselves out of this mess. That’s why we need a Savior. We need someone who can be our new representative before God to undo what Adam did.

Let’s think about what Christ did (yes, I know, He did a lot of things, but I mean for salvific purposes!). Christ is the second person of the Trinity, and we know that He has always existed. What we also know is that we humans fail miserably at keeping our promises to God, because frankly, we’re not perfect. So we’re trucking along in the OT and God is making all kinds of promises (or covenants) with the Israelites, fully knowing that they really can’t keep up their end of the deal (and for the record, we wouldn’t have been able to do it either). Enter Jesus, stage right. God the Father, being perfectly faithful to Himself and to us, upholds His side of the covenant but then also made a way for humans to keep their end of the deal by sending Jesus. Jesus leaves heaven, while still retaining his deity, and becomes a man. Romans 8:2-4 says,

2 For the law of the Spirit of life in Christ Jesus has set you free from the law of sin and of death. 3 For what the Law could not do, weak as it was through the flesh, God did: sending His own Son in the likeness of sinful flesh and as an offering for sin, He condemned sin in the flesh, 4 so that the requirement of the Law might be fulfilled in us, who do not walk according to the flesh but according to the Spirit.

A.maz.ing! (Also if you’d like to know more about why Christ had to die you can view Heb 9:15-22.) Ok so that’s the first key for how this all works. We have right standing before the Father because of Christ. Now, the second key is how what Christ did transfers to us. The phrase “in Christ” is really the first clue. We are literally “in” Christ. Paul writes in Ephesians 2:5-6,

5 even when we were dead in our transgressions, [God] made us alive together with Christ (by grace you have been saved), 6 and raised us up with Him, and seated us with Him in the heavenly places in Christ Jesus,

We were dead, so Christ died to fix it. We couldn’t save ourselves, so God raised Him from the dead, making us alive just as Christ also became alive. He raised Christ up and now He is seated in heaven at the Father’s right hand, we are seated with Christ in heaven.

Come again? I don’t recall ever being in heaven, did you? No near death, extra supernatural experiences here last time I checked.

So how are we seated with Christ? Jesus became our representative to the Father. He goes before the Father on our behalf, making atonement for us, and interceding for us. Check out 2 Corinthians 5:21:

He made Him who knew no sin to be sin on our behalf, so that we might become the righteousness of God in Him.

This process is what theologians call the “imputation of righteousness”. There’s that big fancy word that you can toss around in casual conversation again! (I found a good source from John Piper on this if anyone wants to read more at desiringgod.org.) To explain this a little further, “impute” does not equal ”impart”. God imparts gifts or fruit to us, but He doesn’t impart righteousness. God imputes righteousness to us which means He credits us with HIS righteousness. You’ve all heard this before (i.e. God credited it to [Abraham] as righteousness), you just didn’t know it was called the “imputation of righteousness!” (or that there was such a fancy way of speaking about it) Paul says it this way in Romans 4:6, 11:

6 just as David also speaks of the blessing on the man to whom God credits righteousness apart from works:

God credits us with everything that Christ is. Where it can be said of Christ that He is holy, it can be said of us that we are holy. I gain access to the Father because Christ satisfied the demands of the holy God through His death, and God the Father accepted His sacrifice as a pleasing aroma when Christ ascended to heaven like the smoke from a sacrifice. Christ has constant and unhindered access to His Father and lives to intercede on our behalf! I stand as a free woman without the glaring sentence of condemnation for all eternity because Jesus took my sentence (Colossians 2:14) and nailed it to the cross. He stood condemned so that I wouldn’t be. So when Paul writes about being “in Christ,” now you know he really, literally meant it.

Our little Texas family, embracing Kansas City, for a season of seminary.

...the One who formed you says, "Do not be afraid, for I have ransomed you. I have called you by name; you are Mine."