Following on the heals of my last post, I decided (or more like have been undergoing sculpting by the Potter) that the issue of service deserved further attention. Two weeks ago I sat in a Bible study watching a Beth Moore video in which she asked us to write a letter to Jesus telling Him what we seek (what we want from Him…and I’m not talking a fully furnished home and a Rolls Royce). Some of my letter was practical. “I want my baby to be born AFTER my house is completely built.” “I would like to settle into a church home before Your second coming.” You get the picture. Other parts involved spiritual requests. A few were typical “Give me faith to trust You even when things are hard.” “I want to be a woman of courage.” But then I got to this one issue.

Perhaps you’ve done this, and perhaps you felt as sheepish as I did after being brutally honest. Let me shoot straight, you want to ask Jesus to change someone else so that things would be easier for you. Yeah. I did that. The real issue for me is that there are people who are easy to serve and then there are “those other people.” You’d rather suffer through boils all over your skin than to stoop down and just serve those other people. It’s not that you’re opposed to serving, it’s just that those other people have a sense of entitlement (that you should be serving them), and this attitude makes your skin prickle all over. It makes me jerk my head in defiance honestly. I feel like those people don’t deserve to be served. Am I striking a chord with anyone? Am I the only one who does/thinks this? Bueller?

But like a good girl, I asked Jesus to give me a heart of service anyway because I OBVIOUSLY need it. It’s like asking for patience. We all know what happens when we ask for patience. We are placed in situations in which we must learn to be patient, right? So that means if I ask for a heart of service then I’m likely to have LOTS of opportunities to serve those who are hard to serve. And isn’t this exactly what I don’t want to do? Ugh. I’m really speaking with tongue in cheek here. I trust that God will chisel away at the places in my heart that don’t reflect His character. But the chiseling still hurts…

I had to start thinking about the scenarios that Jesus might have encountered as He walked this earth. He certainly came across countless people who had difficult personalities. He did not pick and choose whom He would serve based on how nice they were or how appreciative they would be or how deserving of the service they were. Jesus told the Twelve, if anyone wants to be first (greatest), he must be last (least) and a servant to ALL (Mark 9:35). This statement came from His mouth right after the Sons of Thunder (James and John) were arguing about who would sit at his right hand in the Kingdom of God! They learned that if you want to be great, you have to learn to be the least person. Up is down. No more thinking you’re important or powerful or in control. You get down and serve, and that is what Jesus calls greatness.

One of the best things about Jesus is that He lived this out. He didn’t come to be served but to serve and give His life for us (Mark 10:45). You’d expect the King over all creation to have a grand reception in which He would be waited on hand and foot as soon as He made His entrance on this earth. But no. He didn’t even have that mindset. 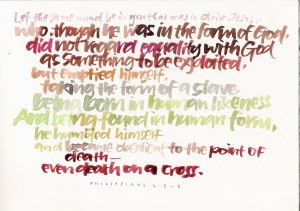 He took the form of a servant (ESV translation) and humbled Himself to die a criminal’s death. If God did this, what’s my excuse?

If I’m going to truly obey His word, He leaves me with no excuse but to bite my tongue and quietly serve (and trust me, there are lots of times I just want to smart off with some corrective or telling statement). It may always be the case that person “x” never learns to appreciate your service. The point is that you’re doing what you’ve been called to do regardless of how person “x” responds. You can leave their issues in the hands of Jesus (who is likely to be chiseling away at person “x” too if that person is a believer). I want to be great in His estimation. If that means to get down, so be it. (Just don’t expect me to like it…at least for a while…and don’t think I won’t have trouble serving because I will.)

Our little Texas family, embracing Kansas City, for a season of seminary.

...the One who formed you says, "Do not be afraid, for I have ransomed you. I have called you by name; you are Mine."

House of Hurt
The Chief End

Adventures in the Chaplaincy, Fatherhood, and Life in General